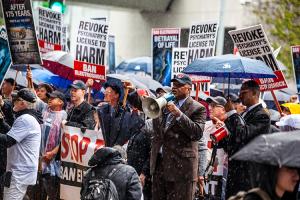 The American Psychiatric Association issued an apology for its role in perpetrating racism, but the Task Force Against Racism and Modern-Day Eugenics says it should be rejected because it could open the door to more psychiatric abuse

The American Psychiatric Association issued an apology for perpetrating racism, but Task Force Against Racism and Modern-Day Eugenics says it should be rejected

LOS ANGELES, CALIFORNIA, UNITED STATES, January 26, 2021 /EINPresswire.com/ — After more than 175 years, the American Psychiatric Association (APA) has issued a formal apology for what it says is psychiatry’s “role in perpetrating structural racism” and “history of actions… that hurt Black, Indigenous, and People of Color” (BIPOC).[1] Responding to the statement, the Task Force Against Racism & Modern Day Eugenics, established by mental health industry watchdog, Citizens Commission on Human Rights International (CCHR), says the apology should be rejected as insufficient. The APA needs to provide specifics similar to what the German psychiatric association did when it publicly apologized in 1999 and 2010 for its role in the Holocaust, spokesperson Rev. Fred Shaw says.

The APA’s statement says psychiatrists had subjected indigenous people to “abusive treatment, experimentation, victimization in the name of ‘scientific evidence,’ along with racialized theories that attempted to confirm their [mental/intellectual] deficit status.” It admits that it failed to declare support for the Brown v. Board of Education of Topeka lawsuit in 1954, which abolished racial segregation in schools. APA also didn’t support major civil rights legislation and its members diagnosed more Black than White patients with schizophrenia—something that CCHR has exposed for decades, including an official report released in 1994. This led to an over-representation of Blacks being prescribed antipsychotics.

CCHR’s Task Force Against Racism & Modern-Day Eugenics was formed in support of the 2020 protests against racism throughout the U.S. It was critical of the APA for failing to admit to its role in racism but, instead, asserting racism causes a host of mental disorders that require more access to treatment.[2] Rev. Shaw, president of the NAACP Inglewood-South Bay, California branch, who helped found the Task Force, which comprises over 80 African American community leaders, says: “These are the people that laid the medical model for modern racism, who backed the eugenics theory of Black inferiority and never truly considered Blacks as human. Now, they want to pour gasoline on the fire by finding another way to capitalize and maximize on Black suffering. They redefined the effects of oppression as a ‘mental illness’ that they needed to ‘treat.’ We’ve seen this before.”

CCHR said it had asked the APA in 2013 to issue a public apology to those impacted by mental health eugenics policies, of which racism is one—steeped in false claims that certain races were inferior and shouldn’t be allowed to procreate. CCHR’s demand followed campaigning for the German psychiatric association (DGPPN) to publicly apologize and admit to its role in Nazi psychiatric euthanasia and killing centers during WWII. In 1999, DGPPN admitted that Nazi psychiatrists had “observed and controlled the selection of those to be killed” and “laid the scientific foundations of the euthanasia.”[3]

In 2010, Prof. Frank Schneider, President of the DGPPN, further broke the society’s 70-year silence and apologized for psychiatrists that had forced patients “to be sterilized, arranged their deaths and even performed killings themselves.” Patients were killed either in the gas chambers, from lethal doses of drugs or by prescribed starvation.[4]

However, in 2009, the then APA president refuted Nazi psychiatry’s role in the Holocaust, calling it “patently ridiculous.”[5]

Shaw points to the 1960s, when psychiatrists invented the term “protest psychosis” to describe Blacks participating in the civil rights movement. It was used to stereotype Blacks as aggressive, with claims that Blacks protesting developed delusions and “dangerous aggressive dealings.”[6] Shaw says that unlike the German psychiatric association that revoked all honors of those DGPPN presidents and officers involved in euthanasia/sterilization, there’s been no similar action taken by the APA with this apology.

For example, in 1792, Benjamin Rush, the “father of American psychiatry” declared that Blacks suffered from a “disease” called Negritude, which he theorized derived from leprosy. The “cure” was when their skin turned “white.” Like lepers, Rush said, Blacks needed to be segregated for their own good and to prevent their “infecting” others. Recorded on the Task Force’s website, Rush was a slave owner and provided a “medical model”—still evident today—to rationalize theories that Blacks were able to endure surgical operations and pain with ease compared to whites, labeling this “pathological insensibility.”[7]

In the 1960s-1970s, U.S. federally funded welfare programs enforced coercive sterilization of thousands of poor black women. Under threat of termination of welfare benefits or denial of medical care, many black women “consented” to sterilization procedures. Girls as young as 9 years old were sterilized.[8]
The APA has not officially condemned those U.S. psychiatrists involved in racism.

Rev. Shaw says the Task Force warns those categorized as BIPOC to study the history of psychiatric treatments given them that harmed in the name of mental health care, including psychotropic drugs with debilitating physical and mental side effects, and electroshock treatment. He says: “While the APA president says, ‘we hope to make amends for psychiatry’s history of actions,’ those amends shouldn’t include more damaging treatments and labeling the response to oppression and racism as a ‘mental disease.’

“People need proper and effective healthcare, not damaging drugs and electroshock. Funds should be redirected from psychiatry into safe, accountable non-psychiatric medical care and social programs for our communities.”

CCHR is responsible for more than 180 laws that protect patients from damaging psychiatric practices. DONATE to support its work www.cchrint.org/cchrint-donate/

[3] “In Memorium,” German Assoc. for Psychiatry, Psychotherapy and Psychosomatics (DGPPN), 1999