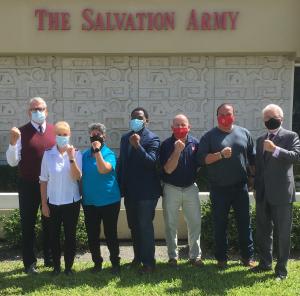 On Thursday, February 25th, The Salvation Army of Palm Beach County joined 16 coalition partners, local residents, and individuals across the world, to participate in END IT DAY 2021. END IT DAY is an annual invitation of the #ENDITMOVEMENT coalition to take a stand against human trafficking. By utilizing a simple RED X drawn on the hand, END IT DAY calls others to join in the fight for freedom and to shine a light on human trafficking.

Majors Chip and Leisa Hall, Area Commanders of The Salvation Army of Palm Beach County, along with Area Command department heads, blazed the path in the fight against human trafficking by boldly displaying the RED X on END IT DAY 2021 (Photo Attached). In addition, END IT DAY was observed at the Territorial Headquarters chapel service by inviting participants to pray for those experiencing human trafficking and to join in the END IT DAY movement.

The Salvation Army, among the largest global nonprofit providers of social services to people living in impoverished communities around the world, is deeply committed to the modern-day fight against human trafficking (for sexual and labor purposes) and forms of commercial sexual exploitation innately linked to sexual trafficking. This commitment emerges from both The Salvation Army’s mission – to preach the gospel of Jesus Christ and meet human needs in His name without discrimination – and is rooted in the organization’s early history.

On the local level, The Salvation Army of Palm Beach County has partnered with Catholic Charities to provide a safe house for victims of Human Trafficking in Southeast Florida. Catholic Charities is providing supportive services (case management, transportation, community resources). Apart from providing safe 24/7 shelter, security, and meals, The Salvation Army Anti-Trafficking initiatives work alongside local law enforcement, FBI, ICE, and numerous other community partners to identify, rescue, and restore victims of forced labor and sexual exploitation. We help both foreign and domestic victims of all ages and ethnicities through our nationwide case management network.

The Salvation Army was founded in London, England, in 1865 by Catherine and William Booth. The Booths went against Victorian conventions and took their ministry to the dirty and dangerous streets of London’s east side where they reached out to the destitute and desperate. Their efforts eventually evolved into a battle to protect women and children from the horrors of sex trafficking. In the 1900s, the organization pioneered an undercover sex trafficking investigation, which directly shaped the Criminal Law Amendment Act of 1885.