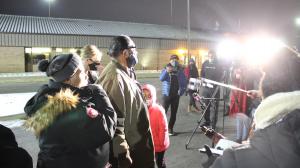 Michael Thompson speaks to press outside his prison after serving 25 years on cannabis-related charges.

Cannabis POW to talk prison reform, receiving $270,000 in donations from the public for his new house, moving forward with his plan to change the system

I believe Michael Thompson's release is just the start of a new wave of criminal justice reform in Michigan. He is determined to help change the system, and he has broad support.”
— Ryan Basore, CEO, Redemption Cannabis Company

Michigan citizens have followed Michael Thompson's story for a year, including celebrity calls for his release, an impassioned letter from Attorney General Dana Nessel and a granting of clemency from Governor Gretchen Whitmer. Michael was released in January and has since spoken out about deplorable conditions within Michigan's prison system. Thompson is expected to address those concerns during the interview.

Also expected is an update on Michael Thompson's recent home purchase, made possible by a Go Fund Me account which garnered more than $270,000 from a staggering 8,400 individual donors. Cannabis companies from across Michigan have contributed directly to the fund, to Mr. Thompson himself or to The Redemption Foundation. The Foundation is the creation of Ryan Basore, a Lansing-area native who served more than two years in federal prison on cannabis charges. The Foundation assists those cannabis prisoners still incarcerated and any recently released parolees.

"I believe Michael Thompson's release is just the start of a new wave of criminal justice reform in Michigan," Basore said. "He is determined to help change the system, and he has broad support. There are more than 1200 cannabis prisoners in Michigan alone." Basore will join the Jazz Cabbage broadcast, as will Mike McCurdy (Chair of the Cannabis Caucus of the Michigan Democratic Party), the regular Jazz Cabbage crew and a few select guests.

"It was a profound moment to watch, as Mr. Thompson walked out of prison into the arms of his daughter," Lowell reflected. "It was equally intense when he addressed the media before leaving about the urgent need to help others who remain in compromised conditions within the prison." Thompson served 25 years "unjustly and inappropriately incarcerated," Lowell added.

The show broadcasts at 4:00pm EST on Tuesday, March 2. Mr. Thompson's segment is scheduled to begin at approx. 4:30pm. Media can submit questions in advance or participate in the dialog by emailing 4mrick@gmail.com before 3pm on March 2 or joining in the chat during the live broadcast. Other inquiries, please call 586 350-8943 prior to the show.