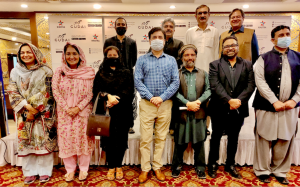 Mr. Shaukat Yousufzai, Minister for Culture and Labor, Government of Khaybar Pakhtunkhwa with the team of RINSTRA and cast of Gudai on the launch of first Pashto web series “GUDAI”. 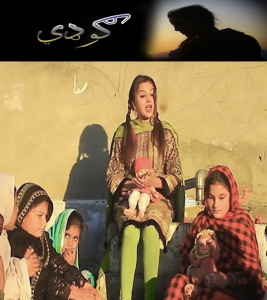 Gudai, first Pashto Web Series in the World by RINSTRA.com 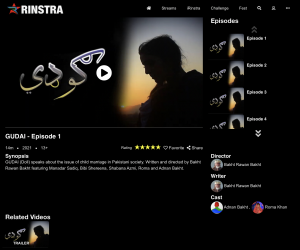 This effort of RINSTRA will revive the film, drama and storytelling in the Khyber Pakhtunkhwa province. ”
— Shaukat Ali Yousafzai, Minister for Culture, KPK

PESHAWAR, KHYBER PAKHTUNKHWA, PAKISTAN, April 14, 2021 /EINPresswire.com/ — GUDAI is a short form web-series which speaks about the issue of child marriage in the Pakistani society. The series is written and directed by Bakht Rawan Bakht, a renowned Pashto writer. The series introduces new and emerging artists from the Pushto Community like Manadar Sadiq, Bibi Shereena, Shabana Azmi, Roma and Adnan Bakht. The series is setting a new milestone for the Pashtu content enthusiasts, both for the content creators and consumers. The series will be available on www.rinstra.com

The poor quality and unrealistic plots have presented a side of Pukhtun culture which is not factual with the reality which many Pukhtuns want to change. Women have been objectified and men owning both the gun and the girl, a stained narrative for the youth who do not want to be associate with the entertainment world telling the tarnished reality to the world. With “GUDAI”, RINSTRA will push the industry for better storytelling and production quality to revive the Pashto film and drama industry, especially for the platform economy.

Speaking at the occasion Minister for Culture Khyber Pakhtunkhwa Shaukat Ali Yousafzai said “We are so happy that this effort of RINSTRA will revive the film, drama and storytelling in the Khyber Pakhtunkhwa. This revival will also cater the needs of the new techniques and approach required to make the younger population more inclusive and be able to understand the cultural strength of the people living in Khyber Pakhtunkhwa”

“Child marriage is a real issue in Pakistan”, said Adnan Shaukat, Chief Executive Officer of Classic Broadcasting, the production company that made the series “GUDAI” jointly with RINSTRA. He further said, “ever since the 18th Amendment to the Constitution of Pakistan 1973, it has been the responsibility and prerogative of each province to legislate on the subject of marriageable age”. “Unfortunately, we have not been able to agree on the minimum age of girls for marriage across Pakistan, Gudai will address the Child Marriage issue in the local context for the potential 35 million native Pashto speaking viewers in Pakistan, said Adnan Shaukat.

Chief Creative Officer RINSTRA Technologies Misbah Ishak Khalid said, “RINSTRA is working to give opportunities to the young talent of Pakistan, and it is necessary to have locally produced content featuring our local artists addressing our local issues, it is necessary to improve the script, story line and enhance the quality of production of series in the regional languages. “GUDAI”, will prove to be the first step towards this”, she further said.

The Child Marriage (Restraint) Act of 1929 which pre-dates Pakistan was one of the first pieces of legislation that sought to identify and set a minimum age for marriage. This Act is one of those few laws on the statute books that were introduced by Muhammad Ali Jinnah while he was a member of the British India Legislative Assembly. Originally, the flooring was set at age 14 which was later raised to age 16 for girls and 18 for boys via Muslim Family Law Ordinance (“MFLO”) in 1961. However, under the new bill passed in Pakistani Senate, the minimum age of marriage for female was increased to 18.

In 2014, the Sindh Assembly unanimously adopted the Child Marriage Act, raising the minimum age for marriage to 18 years and making child marriage a punishable offence. A similar bill was struck down by the National Assembly in 2014. In 2019, claims were made by the KPK government after years of deliberations by stakeholders that the draft of a proposed law had been finalized and it would replace the CMRA 1929. However, the proposed bill is yet to be brought before the assembly for enactment as a law.

Pakistan is committed to eliminating early age marriage by 2030 in line with the Target 5.3 of the Sustainable Development Goals. Pakistan ratified the Convention on the Rights of the Child and the Convention on Elimination of All Forms of Discrimination Against Women (CEDAW) in 1996. Pakistan is also a member of the South Asian Initiative to End Violence Against Children (SAIEVAC), which adopted a regional action plan to end child marriage between 2015 and 2018. Under SAIEVAC, Pakistan joined the Kathmandu Call to Action to End Child Marriage in Asia (2014).

According to UNICEF report, around 21% of the girls in Pakistan are married before the age of 18 the lowest rate among South Asian nations.

RINSTRA is the outcome of the thought leadership of Dice Foundation USA’s Creative Arts and Media Initiative (DICE CAM). It is part of Dice Foundation’s National Innovation Basket (NIB) program, which aims to create media as a cornerstones of Pakistan’s growth strategy.

RINSTRA is Pakistan’s first short-form digital media platform for on-demand streaming and for creation of user generated original content on iRINSTRA. The organization provides entrepreneurship opportunities to emerging and established content creators and film makers in Pakistan and beyond. RINSTRA gives content creators access to a large Pakistani community around the globe, and ithas been able to create a unique platform that offers dramas and films, while enabling users to generate their own content on the same platform. It also has a feature for Content Competition where, more than 100 academic institutions in Pakistan are competing on various thematic areas. The Fest feature of the application has provided some of the leading Film Festivals to partner with RINSTRA for digital viewing of their films and documentaries. This has created an unprecedented experience for viewers in the country.

Creative and independent content with premier shows and films can be accessed on RINSTRA by visiting the website http://www.rinstra.com or downloading apps from the Google Play Store and/or Apple App Store.