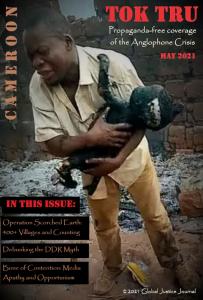 Global Justice Journal’s newsletter will speak truth to power for Anglophones in Cameroon.

The goal of TOK TRU is to cut through the propaganda and provide fact-based information to help readers discern truth from fiction.”
— Cece Buckley

The first issue of TOK TRU, which is scheduled for digital publication on May 1, will tackle some of Cameroon’s most controversial issues, including the Rapid Intervention Battalion’s scorched earth policy, which has resulted in the torching of more than 400 Anglophone villages to date; the government’s failed Disarmament, Demobilization and Reintegration Program; and mainstream media’s apathy toward the Cameroon conflict, which has thus far resulted in the murder, rape, torture and displacement of more than one million people in the South West and North West regions. While Anglophones claim that they are experiencing a silent genocide at the hands of the Francophone government, the government asserts that the atrocities they have experienced have been perpetrated by armed Separatists.

“TOK TRU means SPEAKING TRUTH in Pidgin English, the lingua franca of Anglophone Cameroon,” explains Cece Buckley, founder of Global Justice Journal and editor-in-chief of the newsletter. “The goal of TOK TRU is to cut through the propaganda and provide fact-based information to help readers discern truth from fiction.”

To uncover the truth, the Global Justice Journal team carries out ground zero investigations and conducts covert interviews with current and former Separatists, DDR detainees, internally displaced persons, survivors of atrocities, local humanitarian leaders, as well as high-ranking government officials and advisors. The team then analyzes and validates information within the context of personal observations, eye witness accounts, and credible news reports. “The end result,” says Buckley, “ is reliable, objective reporting that gets to the root of the issue.”