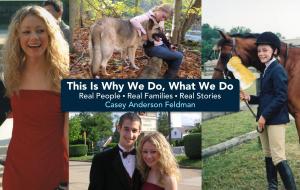 CHARLESTON, SOUTH CAROLINA, UNITED STATES, April 15, 2021 /EINPresswire.com/ — OnMyWay, the #1 mobile app that pays its users to drive safely, has announced a partnership with the Casey Feldman Foundation and EndDD.org

Through their partnership, OnMyWay and the Foundation hope to continue to raise awareness and encourage more people to download OnMyWay in their joint effort to “Save Lives and Prevent Car Crashes.”

Distracted driving is responsible for roughly 9 fatalities every day as well as more than 1,000 injuries. The effects of distracted driving are far-reaching not only to families but to their communities as well. It is estimated that economic losses total approximately 46 billion dollars each year.

To honor Casey’s memory and to launch their partnership, OnMyWay has featured Casey’s story on the “Real People” section of their website, which you can view at https://onmyway.com/blog/real-people/.

In addition, OnMyWay has Donated $10,000 in free travel rewards for simply referring 1 user to sign up for the OnMyWay mobile app
@ https://r.onmyway.com.

OnMyWay Is The #1 Distracted Driving Mobile App In The Nation!

OnMyWay, based in Charleston, SC, The Only Mobile App That Pays its Users Not to Text and Drive. The #1 cause of death among young adults ages 16-27 is Car Accidents, with the majority related to “Distracted Driving”.

OnMyWay’s mission is to reverse this epidemic through positive rewards. Users get paid for every mile they do not text and drive and can refer their friends to get compensated for them as well. The money earned can then be used for Cash Cards, Gift Cards, Travel Deals, and Much, Much More…

The company also makes it a point to let users know that OnMyWay does NOT sell user's data and only tracks them for purposes of providing a better experience while using the app.

The OnMyWay app is free to download and is currently available on both the App Store for iPhones and Google Play for Android @ OnMyWay; Drive Safe, Get Paid. Sponsors and advertisers can contact the company directly through their website @ www.onmyway.com.

About the Casey Feldman Foundation

The Casey Feldman Memorial Foundation works to raise awareness and educate the public on the dangers of distracted driving through EndDD.org.

EndDD.org is an end distracted driving organization founded in 2009. A project of the Casey Feldman Memorial Foundation, EndDD.org was founded by Casey’s parents, Joel Feldman and Dianne Anderson.

It's their mission to save lives from distracted driving through advocacy, education, and action.