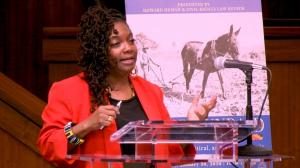 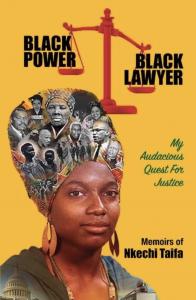 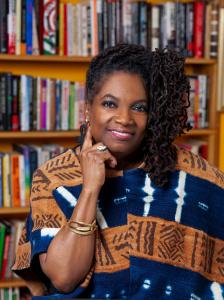 As a Black Power advocate and a Black Movement Lawyer. my mission is to awaken, inform, provoke, move and, at its best, fire you up to either join or continue The Struggle.”
— Nkechi Taifa

Honored as Essence Magazine’s 2019 WOKE 100 Black Women Advocating for Change, Taifa came to the Black Power movement under the watchful eyes of greats like Queen Mother Moore. As a convener of the JusticeRoundTable.org, a progressive voice for justice reform, this Howard grad cries out for a time which she believes has truly come. Through her work on HR40, she seeks to right an historical wrong on the federal level. In this bill, Congress will move to create a Commission to Study and Develop Reparation Proposals for African-Americans.

Over the decades, Taifa, an avid student of justice, has honed the arguments in defense of the dreams of enslaved people who yearned to be free and equal. Now hundreds of years later, Black people are still fighting just to be afforded basic human rights, as in the case of George Floyd who simply wanted to breathe. The George Washington University alum is well known in communities of color for fighting the ongoing battle once thought forgotten but, today, thanks to the social shaking in America, she sees a reemergence of this age-old conflict. Despite the struggle, she sees light at the end of the tunnel.

Often consulted on matters of justice, Taifa was quoted in the now-famous Atlantic expose on being Black in America by Pulitzer Prize finalist Ta-Nehisi Coates. As the idea of reparations finds its footing in this generation, Taifa stands as more than a resource as she speaks as the deep guttural groan for freedom. And it seems her work and that of those unsung heroes she heralds has not gone in vain.

Recent polls say the winds of change are shifting in favor of reparations. According to Democracy in Color, nearly 40 percent of White Americans now agree it's time for real movement in the national debate over reparations for enslaved people. Taifa cites countless examples including monetary reparation paid to Japanese Americans wrongly interned during World War II – says Taifa “Japanese Americans received an apology and restitution, but 400 years later African American people have yet to have an official apology from Congress signed by the White House.”

Pointing to the example of the recent murders of George Floyd, Daunte Wright and the brutal lynching of Emmett Till – these incidents of hate were catalysts for change.

Both Wright and Floyd’s murders were caught on tape but Till’s mother famously held an open casket so the public could see the brutalization of her son for itself. In much the same way Taifa charges that no longer will the blood, sweat and tears of our forebears be swept under the rug – but the “casket is now open” and all of the country’s atrocities towards Black people are laid bare before the world to judge.

It is heart-wrenching moments like these that stir Taifa to keep hope alive. She says her one purpose “as a Black Power advocate and a Black Movement Lawyer is to awaken, inform, provoke, move and, at its best, fire you up to either join or continue, “The Struggle.”

If you want to hear more from Nkechi Taifa and the fight for reparations and justice system reform, contact Pam Perry at 248-690-6810 or staff@pamperrypr.com