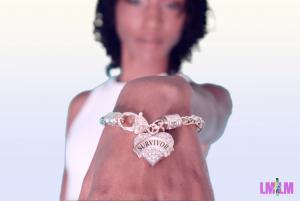 Brittany Chrishawn celebrating her one year survival of police brutality on May 13, 2021

Police brutality victim, Brittany Chrishawn, launches the official website for The LMLM Network where women survivors can unite and be heard.

UNITED STATES, June 21, 2021 /EINPresswire.com/ — On May 13, 2021, Brittany Chrishawn (Williams-Moore) celebrated the one year anniversary of her survival of police brutality. In celebration, she released a video showing her recovery progress over the past year with never seen before footage. But most importantly, she launched the official website for The LMLM Network where women survivors of police brutality can join together and have their voices heard.

LMLM stands for "Love me or leave me", and the network was created after Brittany Chrishawn produced an award-winning film about police brutality (Illville) and was then coincidentally brutalized by JSO police. She later decided that she could help herself and others through film.

After releasing her body camera video and revealing to the world how she'd been wrongfully beaten and sexually harassed by male police officers, many other women reached out to Brittany with similar stories that have gone untold. So, The LMLM Network gives other women survivors of police brutality a chance to share their stories and support one another.

"It's difficult being a woman survivor of police brutality. All of the focus is usually on victims who lose their lives, so many of us survivors go unheard and uncared for. No one really thinks about the sexual aspect of a woman being overpowered by men with badges. And a lot of the time, we're not just brutalized but sexually harassed and assaulted as well. We have trauma on a whole other level to live with for the rest of our lives that people aren't thinking about. We desperately need a support system, and it absolutely helps to be heard." Brittany says.

Last year, Brittany survived what many are saying is one of the most disturbing attacks by police caught on camera. She was brutalized by multiple JSO policemen after Officer A. Carmona randomly trespassed on her property. And without the release of her body camera video in December 2020, no one would have ever known how blatant and brutal her attack was. So, as she recovered from broken teeth and damaged nerves, she realized how impactful film is and how much it can help victims like herself. It dawned on her that without the skills acquired from making Illville, the police brutality film she’d won several awards for right before she was brutalized by police, her survival story might have gone untold like many others. So she created The LMLM Network to give other women survivors of police brutality a voice through documentary film. And she calls the documentary Survival Stories.

So far, Brittany has interviewed other women survivors and anti-police brutality advocates in Jacksonville, FL including Florida House Rep. Angie Nixon and Co-Founder of the Jacksonville Community Action Committee (JCAC) Christina Kittle who are to be featured in Survival Stories.

Through the official website, LMLMnetwork.com, women can submit their stories to be featured in the documentary. And women who join the online network are also given access to a support system of women who've survived police brutality. This community of women provide helpful guidance and resources gathered from their own personal experiences to help the next survivor heal and seek justice.

"I remember shedding many tears feeling alone and hopeless. So, I want this online space to be a place where we can discover ways to cope and work towards real change. I want us to be in unity telling anyone who stands against us – you know what, you can 'Love me or leave me.' as we collectively conquer.” says Brittany Chrishawn.