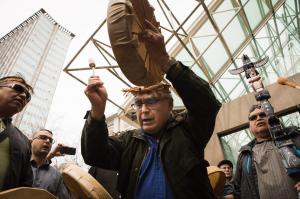 TOFINO, BRITISH COLUMBIA, CANADA, June 22, 2021 /EINPresswire.com/ — The Five Nuu-chah-nulth First Nations of Ahousaht, Hesquiaht, Ehattesaht/Chinehkint, Mowachaht/Muchalaht, and Tla-o-qui-aht congratulate the Government of Canada on their decision to end the more than 15 years of litigation against our Five Nations.

On April 19, 2021, the BC Court of Appeal (BCCA) ruled in favour of the Five Nations’ appeal. The BCCA decision overruled the lower court’s ruling that restricted our commercial fishing rights, re-affirming the original 2009 decision that fishing is an integral part of the Nations’ economy. The ruling also reaffirmed how Canada should uphold and accommodate the Nations’ Aboriginal rights, including priority of access for the Nations’ fishers. The priority of the Five Nations court-affirmed Constitutional right to any species within our territories was repeatedly emphasized in the BCCA decision. Additionally, the BCCA stated that the parties involved “should be in a position to consult over allocations, and agreements on the allocation process.” The Five Nations have had to return to court repeatedly to force the federal government to act in good faith and consult in a meaningful way with the Five Nations on fishing agreements.

Consistent with Bill C-15 and the BCCA ruling, we call on Canada to turn to finalize our work together through negotiations to uphold, accommodate, and implement our Five Nations’ right to catch and sell fish from our territories on the West Coast of Vancouver Island.

Our Five Nations’ objective is to revitalize our role in fisheries as this is an essential part of our past and future. Our immediate goal is to get our fishers out on the water supporting their families and the health, culture, and economy of our communities. Our objective is consistent with the Liberal government’s stated commitments to reconciliation and to upholding section 35(1) of the Constitution. It is also consistent with the recognition of the rights of self-government, economic development, and the utilization and benefit of resources in Indigenous territories – all recognized in the United Nations Declaration on the Rights of Indigenous Peoples, previously endorsed by the Liberal government, and recently further supported by Canada through Bill C-15.

“This is good news, and we appreciate that the Government of Canada has finally agreed to end a decade and a half of needless and expensive litigation. All we had asked was for our rights to be respected – you don’t need endless legal battles to do the right thing. We also must now turn to the other work we have with Canada: finalizing our reconciliation agreement. This decision does not diminish the amount of work that needs to be done to breathe life into what Indigenous people consider to be reconciliation and to convince Canada that it is a two-way street,” said Wickaninnish, Cliff Atleo, lead negotiator for the Ahousaht First Nation.

“It has been an honour and a privilege to stand with Nuu-chah-nulth fishers in their fight to exercise their Indigenous right to catch and sell fish caught within their territory. I am grateful to the government for finally respecting the re-affirmation of their rights by the courts. Now that this matter is settled, I am hopeful that the government will now come to the table with the Nuu-chah-nulth and negotiate a fair allocation,” said Gord Johns, NDP MP for Courtenay-Alberni and NDP Critic for Fisheries and Oceans.

Wickaninnish, Cliff Atleo continues: “I am not happy with the Government of Canada’s interpretation of reconciliation because it falls short of allowing us to re-establish our way of life that supports our families and communities. Canada’s current approach is just not going to cut it. They need to pay attention to our perspective of what reconciliation is. It’s still going to require a lot of work and effort on the part of both Canada and our people to secure some certainty in the fishing industry. We want our fishers to be able to make a living, just like the rest of Canada has been able to do using resources in our territories.”

The Five Nations hope that Canada’s decision not to appeal the BCCA ruling signals a commitment to concluding a reconciliation agreement with the Five Nations this summer. Our Five Nations are committed to moving forward with Canada on behalf of our Ha’wiih (hereditary Chiefs), our fishers, our families, and the fisheries resources that we all depend upon.