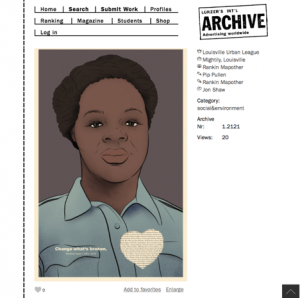 LOUISVILLE, KENTUCKY, UNITED STATES, July 29, 2021 /EINPresswire.com/ — An Illustration and Poster Campaign honoring the lives of Breonna Taylor and David McAtee received the Silver Award at the 2021 National ADDYs presented by the American Advertising Federation (AAF) in June. The produced pieces were created by Mightily, a Louisville based full-service advertising agency, and commissioned by the Louisville Urban League, in response to police violence and the nationwide outcry for reform and social justice.

Breonna Taylor was fatally shot in her Louisville, Kentucky home on March 13, 2020, when officers from the Louisville Metro Police, forced entry under a “no-knock warrant”. Almost three months later, on June 1, 2020, while attending a protest for Breonna Taylor and George Floyd, David McAtee was fatally shot by the Kentucky Army National Guard. As protests erupted across the City, The Louisville Urban League tasked Mightily with the time sensitive project of providing materials that would stand out in store windows, at marches, and on social media, in support of the movement for change.

The illustrations and poster campaign created by Mightily, reflect a nostalgic aesthetic, drawing inspiration from the social climate of the late 60’s and early 70’s, with a bold and simple approach that integrates a ripped paper graphic treatment.

“This project demonstrates the powerful intersection between art and humanity, where a single image or symbol can evoke our emotions with just one glance. We had to develop an approach that could visually communicate the purpose behind the campaign. We chose an old-school conceptual angle to inspire the protest marches to move forward and to symbolize a movement that was not turning back.” – Rankin Mapother, CCO

The AAF/National ADDY Awards are a premiere creative competition, recognizing outstanding work in the field of advertising, bestowing 216 national awards out of 700 entries that were eligible. This year’s awards presented Mightily with a Silver Award for their poster campaign that centered on the lives of Taylor and McAtee. The poster campaign received multiple ADDY’s at the AAF local and district competition, before qualifying for national consideration.

“Reflecting back on that time, when citizens were mobilizing and there was an emotional charge across the city and the country as whole, we knew we had to simply trust the creative instincts of our team and turn the work around quickly. To meet that type of deadline, we had to bring in additional creatives that really understood what this project represented to Mightily, the city of Louisville, and most importantly, to the Taylor and McAtee families. Although we are honored by the recognition from the AAF, we are genuinely humbled to have played a small part to honor the legacies that started a movement.” – Lesa Seibert, CEO Mightily.