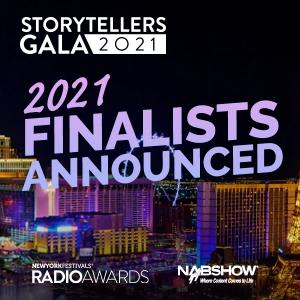 Once again, this year’s Finalists in addition to appealing to their own listeners, also impressed the Grand Jury with their mastery of the audio medium.”
— Rose Anderson, VP/Executive Producer, New York Festivals Radio Awards

The 2021 Radio Awards Grand Jury of creative media professionals and content creators from around the globe selected Finalists based on production values, writing, creativity, direction, achievement of purpose, and audience suitability. Entries achieving Finalist status will advance to the next round to determine gold, silver, and bronze trophies.

“Once again, this year’s Finalists in addition to appealing to their own listeners, also impressed the Grand Jury with their mastery of the audio medium. Across all genres, they proved that radio – the original social medium – is robust and thriving. From podcasts and audiobooks to sound art and breaking news, these talented storytellers bring the world together and engage in real time,” said Rose Anderson, VP/Executive Director, New York Festivals Radio Awards.

Audio Book listening saw an uptick in 2020 and a robust number of compelling Audio Book entries featuring celebrity narrators advanced including: HarperCollins Publisher’s “Mary Poppins Comes Back”, read by Academy Award winner, Olivia Colman and “The Hobbit, By J.R.R. Tolkien” read by Andy Serkis. Penguin Random House titles moving on to the medal round include: “A Life on Our Planet” read by Sir David Attenborough, “To the Lighthouse” read by Rita Wilson, “Imaginary Fred” read by Ciarán Hinds, and “Judge Dredd: America” read by Joseph Fiennes. Other Finalists Include: “The Tale of Peter Rabbit” Almost Tangible and “Händelser vid vatten / Backwater” Sveriges Radio. View the 2021 Finalists: https://radio.newyorkfestivals.com/

Breaking News, features, and investigative reporting captured events as they unfolded, revealed the truth about provocative topics, and unearthed critical facts from around the globe. Entries moving on to the medal round: “Road To November” (Canadian Broadcasting Corporation), “The Great Post Office Trial” (Whistledown), “Century of Sound” (CBS News Radio), “Guyon Espiner” (Radio New Zealand), “Snapshots from Black America” (BBC Radio 4), “Maradona. The Last Idol” (National Radio of Argentina), “America in the Morning” (Westwood One), and “Latin American corruption in times of Covid-19” (Voice of America.)

The Radio Awards receives entries from radio stations, networks, and independent producers from over 30 countries around the globe. The mission of the competition is to honor the achievements of the men and women who make up the global audio storytelling community.

The 2021 NYF Radio Award winners will be announced on October 12th at the annual Storytellers gala taking place at NAB in Las Vegas. This year is the eleventh year of NYF’s strategic partnership with NAB Show, the ultimate marketplace for people passionate about media, entertainment, and technology. All winners and attendees will have access to the multi-day NAB event which is the world’s largest media entertainment marketplace taking place this October.

Entries to each of the competitions are judged around the world by panels of peers in their respective industries. For more information, go to www.newyorkfestivals.com.

About NAB Show
The 2021 NAB Show will be held October 9 – 13, with exhibits open 10 – 13 at the Las Vegas Convention Center. NAB Show is the world's largest and most comprehensive convention encompassing the convergence of media, entertainment and technology. NAB Show is where global visionaries convene to bring content to life in new and exciting ways.

About NAB
The National Association of Broadcasters is the premier advocacy association for America's broadcasters. NAB advances radio and television interests in legislative, regulatory and public affairs. Through advocacy, education and innovation, NAB enables broadcasters to best serve their communities, strengthen their businesses and seize new opportunities in the digital age. Learn more at www.nab.org.