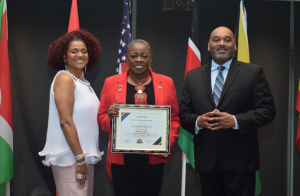 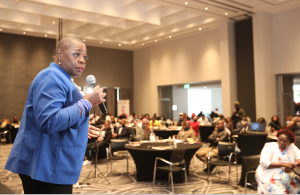 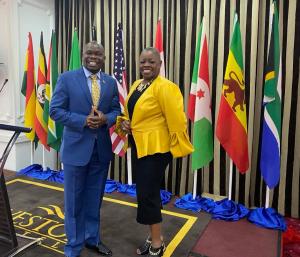 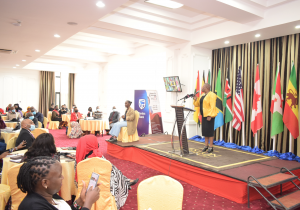 Barbara H. Smith Addresses the Crowd at the Women Positioned for Excellence event in Kenya 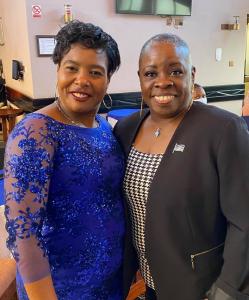 I wanted presenters that would aid in my event's success. Barbara's ability to personally connect was a major factor in creating not just change but also transformation in the mindset of the guests.”
— Winnie Joy

NAIROBI CITY, KENYA, September 12, 2021 /EINPresswire.com/ — While in Nairobi, Kenya international speaker and corporate trainer Barbara H. Smith received the Dr. Astell Collins Global Inspiration Award for her work and service to others. Barbara was hand-picked by several event hosts to be a presenter during the “recovery week” events held in Nairobi, Kenya during the second week of July 2021. According to Dr. Ruben West who conducted the Live Your BEST Life Nairobi event on 17 July 2021, COVID-19 had caused a significant impact on the people of Kenya. No one was exempt. The goal of “recovery week” was to get them fired up again both personally and professionally.

Getting them fired up was exactly what Barbara did according to Dr. Nashon Juma of Nairobi. Dr. Juma coordinated the Women Positioned for Excellence event held in Nairobi, Kenya at the Weston Hotel. He wanted Barbara based on her wealth of knowledge, passion for people and ability to inspire listeners to become a greater version of themselves.

Winnie Joy hosted an event during “recovery week” entitled Leadership In Action. She became familiar with Barbara after listening to The Barbara H. Smith Show, airing weekly on the IBMTV network streaming on Amazon Fire and Roku. According to Winnie, “after hearing her in action I knew I had to have her live in Kenya.”

Both Winnie Joy and Dr. Nashon Juma were on hand to see Barbara receive the I Change Nations Dr. Astell Collins Global Inspiration Award. The award was presented by Dr. Ruben West.

In 2019 Dr. Ruben West was appointed Special Envoy for I Change Nations by the organization’s President and founder Dr. Clyde Rivers. Dr. West carries out his global mandate by identifying deserving individuals and submitting them to the organization for award consideration.

I Change Nations is a Culture of Honor System; the organization is committed to bringing back the lost art of honor by building a Culture of Honor that recognizes individuals throughout the world who have exemplified extraordinary humanitarian efforts to effectively change nations.

According to ICN founder Dr. Clyde Rivers, ICN honors people and organizations that believe every life is valuable and is created to bring a contribution to the world. ICN is the largest “building cultures of honor” network in the world.

Dr. West said Barbara has so many dimensions. Even before coming to Kenya to speak she had identified organizations to support. She continued to find additional ways to serve while in the country. Her impact was so great, she is already scheduled to return in November 2021. I think the people of Kenya have discovered what some companies and communities may have missed in the United States; Barbara provides maximum return on your investment bringing out the very best in your people.

Barbara founded BHS Consulting, LLC. in 2016. She and her team offer customized corporate training programs. Barbara offers one-on-one executive coaching for leaders. Her coaching is designed to help clients improve their careers, engage their audiences, and promote their messages. Professional development coaching is also available for organizations that wish to empower their managers and leaders.

Barbara H. Smith is now in the company of a number of world leaders that have been awarded by the I Change Nations organization.

President Yoweri Museveni, of Uganda:
Honored for his great leadership in establishing and maintaining peace in his country.

First Lady, Janet Museveni, of Uganda:
Honored for the AIDS awareness policy ABC (Abstinence, Birth Control, and Contraception) an
ever-present battle for the health of their people.

Vice President of Kenya, Kalonzo Musyoka:
Honored for his efforts in the peace making process for Kenya, Sudan and Burundi.

Former President Olusegun Obasanjo, of Nigeria:
Honored for the Anticorruption policies he implemented in Nigeria.

First Lady Maria de Luz Guebuza, of Republic of Mozambique:
Honored for her humanitarian efforts for the youth and women of her country as well as
bringing AIDS awareness programs.

Former President Wolde Giorgis, of Ethiopia:
Honored for his efforts to build a better environment in his country.

Dr. Vanda Pignato – Former 1st Lady of El Salvador:
Honored for her tireless efforts in protecting for women’s rights in the Republic of El Salvador.

Dr. Kenneth David Kaunda – Former President of Zambia:
Honored for his life’s work to establish peace in Zambia and on the continent of Africa.