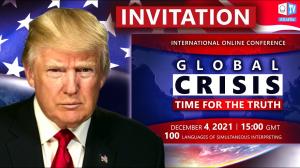 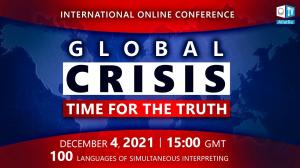 The Creative Society, where the greatest value is human Life, is a covenant of our prophets to us.

President Donald J. Trump is called for by American citizens to be the voice of Humanity at the global online conference "Global Crisis. Time For The Truth”

President Donald J. Trump “will you be the voice of the American people and people all over the world in accepting the invitation?”
— American Citizens

ATLANTA, GEORGIA, USA, September 22, 2021 /EINPresswire.com/ — President Donald J. Trump is called for by American citizens to be the voice of Humanity at the world's global online conference "Global Crisis. Time for the Truth” on the platform of the ALLATRA International Public Movement.

Americans inquire of Mr. President, “will you be the voice of the American people and people all over the world in accepting the invitation?” International Online Conference “Global Crisis. Time For The Truth”, will be held on December 4th, 2021.

It will be broadcast worldwide on thousands of media channels and platforms with simultaneous interpreting into more than 100 languages. This unique format is entirely initiated and organized by ordinary people from more than 180 countries.

The goal of the conference is to bring global attention to the true scale of the global disaster and the dangers that humanity will face in the near future. The need for this vital information to reach a global audience motivates individuals to contribute and perform simultaneous interpreting in 100+ languages on their own.

The international online conference "Global Crisis. Time for the Truth" is a large-scale event organized by volunteers from 180 countries on the platform of the ALLATRA International Public Movement. It will be broadcast on thousands of media channels worldwide.

The objective of the conference is to inform humankind honestly and truthfully about the scale of the climate and environmental crises, about the impending threats, and the real way out.

Key topics of the conference:
● What is the real climate situation on the planet?
● Why is the global media silent about the scale of the threats?
● Why does the climate continue to change rapidly despite international treaties and agreements which officially stated goal is to curb climate change?
● What is the real cause of global climate change?
● From what risks and global threats have people's attention been diverted?
● What are the environmental consequences of reckless human consumerism?
● Why only in the Creative Society is it possible to stabilize the ecological equilibrium of our planet?
● Why, in the face of planetary cataclysms, the Creative Society is the only way out?

On July 24, 2021, the previous international online conference: "Global Crisis. This Already Affects Everyone," was held with simultaneous interpreting into 72 languages.
https://youtu.be/IcmqpJlGDGk

Since the time of the previous conference, we have been observing the accelerating progression of climate change. Irreversible changes to the planet are recorded daily. Why is the truth about the real state of our planet being silenced? Why is the truth about the real cause of climate change being silenced? Do we look at the root of the escalating problems? Do we see the real causes of what is happening?

Public figures, researchers, scientists, and experts from various fields will participate in the conference and share their views on the cause of the growing climatic and ecological crises.

We aim to inform humanity about the real problems, in order to stop the impending disaster together.
Neither borders nor walls can stop climate change. Only by building the Creative Society can a planetary-scale disaster be prevented. The Creative Society is our only chance to survive. Everyone must hear the alarm bell of the imminent threat to humanity. Everyone must see the irrefutable facts and evidence of impending disasters. It is time for the Truth!

At this conference, we welcome every person who is not indifferent to his fate, to the fate of his children, his loved ones, and to the fate of all humankind! There is nothing more important today than information on how our humanity can survive, and how to save our planet. We should not be afraid of filth; we need to expose it. The truth purifies. The truth unites! The truth gives a chance for life!

Join the online conference "GLOBAL CRISIS. TIME FOR THE TRUTH" on December 4, 15:00 (GMT).
Now it's up to everyone how quickly people will find out the Truth and unite. The future of humanity is in your hands!

Watch the conference "Global Crisis. This Already Affects Everyone" in 72 languages of the world: https://allatraunites.com

Send your video feedback on the conference to our email info@allatra.tv

"The Future? This Affects Everyone" | NEW VIDEO with Igor Mikhailovich Danilov:
https://youtu.be/pUegF_knWoc