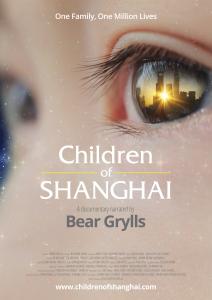 Up until 22 years ago there were no fostering programs in China meaning abandoned and disabled children were left to languish in orphanages.

In the documentary, Grylls follows the extraordinary story of former professional footballer, Robert Glover, who, together with his wife Elizabeth and their six young children, moved from the UK to China in 1998, and founded the charity Care for Children.

The documentary focuses on six of the children who moved on from life in orphanages to achieve success as young professionals working in technology, finance, tourism, arts and sports and, in a series of touching reunions, their foster parents recall their battles to help them overcome prejudice and serious developmental difficulties.

This was the first joint venture social welfare project between the British and Chinese governments and it has placed a million Chinese orphans with Chinese families.

Adventurer, writer and TV presenter Bear Grylls, said: “Such an inspiring story of bringing hope and love into so many vulnerable young Chinese lives… I admire Robert and his family so much for all they have given.”

Care for Children founder Robert Glover, commented: “These are powerful stories of redeemed lives, I didn’t think I would see this in my lifetime. The outcomes of family life are remarkable and there are a million more stories out there.”

Multi-Grammy Award winner Matt Redman, stated: “’Children of Shanghai’ is the most inspiring documentary I’ve seen for a very long time. The Bible reminds us time after time how God’s heart leans towards the orphan – and this movie echoes that very same theme – in such a powerful way. Watch how one family’s ‘yes’ to Jesus led to a multitude of orphaned children finding families of their own. Simply amazing – a must see movie!”

Director Richard Nash, said: "Robert's near-legendary status in China granted us extraordinary filming access across the country. It was inspiring to meet the thriving young adults who had spent their early lives in orphanages transformed by being fostered by local families. This is a wonderfully positive story to tell in these fraught times.”

Filmed in Shanghai, Beijing and Chengdu, with unprecedented access to all levels of Chinese society, this is a powerful and inspiring testament to the power of international cooperation and human compassion.

An accompanying book entitled As Many As The Stars by Robert Glover was published in 2020 by Hodder & Stoughton.