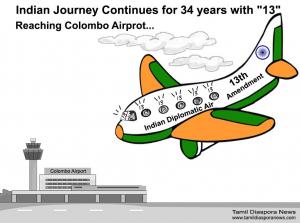 Sampanthan and Vigneswaran talk about “13” to suppress their critics, and India invokes “13” to threaten Sri Lanka to get whatever India wants from Sri Lanka.

The word “13” did not intimidate Sri Lanka or move it to act, however. Now India is the loser as China is flexing its muscles in Sri Lanka and the region, right in India’s backyard.”
— Editor, Tamil Diaspora News

In 1987 every Tamil militant surrendered their arms, including Liberation Tamil Tigers, in the name of the Indo-Lanka accord and the 13th amendment. The India and Sri Lanka Co-Donour countries promised full implementation.

Sonia Gandhi had told the Tamils in Tamil Nadu during the election campaign of 2009 that the 13 plus would be implemented as soon as the war came to an end.

Even the UNHRC resolution mentioned that the 13th amendment must be implemented.

All Indian leaders said the words “the 13th amendment.”

It has become a running joke among the international diplomats, as nothing has been implemented that even comes close to providing security for the Tamils.

This so-called 13th Amendment was created by the Sri Lankan government as its version of the Indo-Lanka accord. India forced the amendment on Tamils. It never received any blessing from the Tamils. In fact, in 1987 the Tamil leader Amirthalingam and their party rejected the amendment entirely.

The Indo-Lanka accord recognizes “that the Northern and the Eastern Provinces have been areas of historical habitation of Sri Lankan Tamil speaking peoples, who have at all times hitherto lived together in this territory with other ethnic groups.”

But Sri Lanka used their own kangaroo court and abolished the first important portion of the 13th Amendment, which was intended to establish provincial sovereignty of north-east provinces among the Tamil speaking provinces and protect their security.

The Indo-Lanka accord says that “The Government of India will co-operate in ensuring the physical security and safety of all communities inhabiting the Northern and Eastern Provinces,” but India never tried to stop the killings of 146,000 Tamils, the raping of thousands of Tamils, or countless other atrocities.

In fact, Congress leader Sonia Gandhi wanted to permit Sri Lanka to conduct more killings of the Tamils without any restrictions whatsoever. But the Obama administration tried to send ships to extract the Tamil Tigers from Vanni so that the massacres could be stopped.

It has been 34 years of empty rhetoric and empty promises about the 13th Amendment, but nothing has been implemented.

In fact, Sri Lanka violated the Indo-Lanka accord and dishonored the agreement by stripping its provisions and refusing to enact the most important feature of the accord.

Every Tamil politician, including Vigneswaran and Sampanthan, talk about “13” to suppress their critics, and India invokes “13” to threaten Sri Lanka to get whatever India wants from Sri Lanka.

The word “13” did not intimidate Sri Lanka or move it to act, however. Now India is the loser as China is flexing its muscles in Sri Lanka and the region, right in India’s backyard.

The Tamils in Sri Lanka can only laugh when Mr. Sampanthan says the word “13” and speaks of the amendment.

It shows that India does not have strong enough leadership to assist the Tamils with their political needs or help resolve the crisis.

It is time for the Tamils to start to think of other ways to free themselves from Sri Lankan aggression and oppression. India has apparently abandoned the Tamil people and the idea of Tamil homeland.