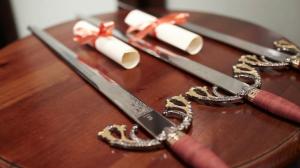 Essential to the social work of Scientologists is their sustainable worldwide drive for Freedom of Religion or Belief for all, and they mean ALL.

on 29th October 2021, will get to know the three new awardees, in this 8th edition of an award that is getting momentum”
— Ivan Arjona-Pelado

MADRID, SPAIN, October 14, 2021 /EINPresswire.com/ — Essential to the social work of Scientologists is their sustainable worldwide drive for Freedom of Religion or Belief for all, and they mean ALL, not only as part of laws, Constitutions and International Treaties, but as a real fact to still be achieved in too many places including within Europe and its surroundings.

While more and more complaints are appearing against European countries who send religious refugees back to the places where they will likely be detained, and sometimes even tortured (Germany is one of the countries sending them away), we also have a stronger than ever legal protection of these rights. What governments are lacking is many times the know-how for the implementation, and for some cases, they are lacking a real and honest intention of doing so.

To help create a better impact in the laws but even more on the knowledge about them and their implementation, the Church of Scientology created in 2014 the Religious Freedom Awards, which were born in Spain.

Promoting religious freedom, or “Freedom of Religion or Belief” as it is called in Europe, is in the essence of the Creed and the Code of the Scientologists, as formulated by L. Ron Hubbard.

It is however no secret that most of religions, if one properly studies their teachings, would advocate for the human dignity and therefore the freedom to choose and be treated with equality, and so is enshrined also in the Spanish Constitution, the ECHR, and the Universal Declaration of the Human Rights. They all praise the need of existence and respect of Religious Freedom in all aspects. Individual conscience and associative about the existence of the human being it’s linked to the search of the origin and the reason of the creation. Just last week the European Court of Human Rights condemned a country for having illegally detained a citizen for the sole fact of his religious affiliation. And one has to say that despite these type of courts decisions, there are still countries who call themselves defenders of human rights and religious freedom, which harass citizens and corporation for the sole fact of their religion, and we do not need to go to any Asian country to find them, because they are right here in the European Union.

Anyway, coming back to the awards [I felt important to explain that freedom of religion is not a total reality in our continent yet], the Scientologists with this award, have wanted to acknowledge the task and efforts of those people or institutions that have shown through the years their fight and determination over the defense of Religious Freedom (even of beliefs that they don´t share) and whose actions have brought people closer to the goal of achieving Total Religious Freedom.

While it was started by the Church of Scientology in Spain, in 2015 the responsibility was given to the Foundation Improvement of Life, Culture and Society (Fundacion Mejora), founded by the Church, an which in 2019 gained Special Consultative Status to the United Nations Economic and Social Council.
This prize “Religious Freedom Awards” is given in the shape of a Tizona sword, forged in Toledo. We have to admit that, from all weapons invented by the human being, none has yet reached the esoteric and mysterious symbology of the Sword. The sword first appears in the Metal Ages, at the IV millennium before Christ approximately. This happens both in Prehistory and presently, and also as much in the different religions as in the popular folklore. It aslo carries a magic mission of fighting dark forces. This spiritual weapon, symbolizes the defense of peace and order by means of the authority that is granted by reason.

But moreover, the sword has a deeper and more esoteric symbology that is even magical, this, if we understand the word magical as the faculty of an object of transforming a person’s insides. It is the archetype of the sword the one that gets more attuned with nature and human essence, as an extension of the individual, an extension of the active will and, because of that it has been and it is the physical representation of Honor and Dignity of the Knight that defends Light against Darkness.

For Alfonso X the Wise, the sword symbolizes the virtues of: common sense, strength, moderation and justice. Common sense calls for caution. Strength is the virtue that makes the man stay strong and steady against dangers that might prey on him. Moderation means temperance and peace of mind. Justice makes the person who applies it a right one, and it is right to get carried by it.

And so, on 29th October 2021, will get to know the three new awardees, in this 8th edition of an award that is getting momentum.