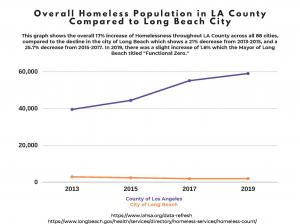 LOS ANGELES, CALIFORNIA, UNITED STATES, October 21, 2021 /EINPresswire.com/ — The City of Long Beach was able to accomplish what few of their neighboring cities have, reduce homelessness to less than 2% or as Mayor Garcia calls it, “Functional Zero,” all the while saving millions of dollars in the process. Long Beach, California is a case study on how cities throughout the nation can address homelessness.

The first was by selling Community Redevelopment Agency land, originally intended for affordable housing, to supplement the General Budget which could use the funds for higher need purposes.

The second was through the utilization of their own HUD Homeless Count Team, while most of the County of Los Angeles uses one agency to perform their homeless count and is open to all who desire to volunteer. The City of Long Beach created their own HUD Homeless Count Team that allows them to be more precise when counting individuals experiencing homelessness. In addition, they created an application and filtering process to ensure only qualified candidates are selected to perform the count annually. In addition, giving them control over the data and enabling them to report the information quicker to the public.

Lastly, they utilized their existing shelter's capacity and delayed, deterred, and blocked new programs and services from opening while creating zoning and land use restrictions. Instead, the city utilized a policy and practice of referring individuals and families experiencing homelessness to neighboring cities.

With these policies and practices combined they were able to decrease homelessness in the 2nd largest city in the County of Los Angeles for years until 2019 which saw a slight increase of less than 2%, or “Functional Zero.” And, while the rest of the County of Los Angeles saw double digit increase of 10% – 22% in homelessness throughout the 88 cities, Long Beach saw a decline until 2019. In 2019, there was a 1.6% increase for the first time in half a decade.

The politics of housing and homelessness are difficult, especially for aspiring elected officials. Cities throughout America can avoid this difficulty, politicians can avoid the tough choices of expanding social safety net programs, and save millions by following Long Beach’s example.