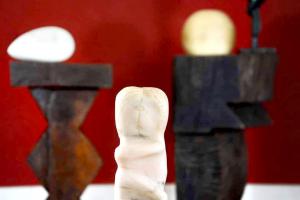 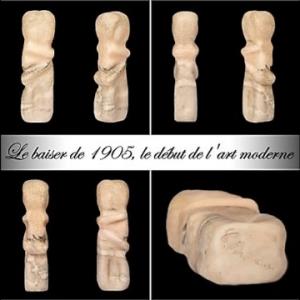 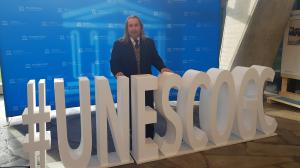 Knowledge of the universality of culture promotes dialogue and peace

The “Cercle d’Etudes Scientifiques Pierre Rayer” has demonstrated the universality of creation, in its artistic and architectural application. This discovery places our humanity at the centre of the relationships that animate us and acts as a spiritual guide conducive to the blossoming of peace and individual and universal happiness
Thierry Rayer, ambassador of the World League for the Right to Happiness, a specialist in European science from antiquity to the Renaissance and a descendant of Emperor Napoleon I, will present the discovery "The knowledge and know-how of the universal process of creation" at the Institut de France, as well as the universal works of art of Constantin Brancusi, including the sculpture "le baiser de 1905", which is the source of the discovery.
This presentation to leading figures in the art market and diplomacy will show how Brancusi's universal works of art are invaluable both culturally, scientifically and financially.

Question : At first, what is “ the knowledge and the know-how of the universal process of creation “?

It is of consequence to know that at antique time the artists should master numerous and different capacities to realize their works. For painting, one should be able to manufacture all the materials he needed: his canvas and his paint-brush, his pigments. The simple making of his pigments needed to know chemistry. An artist should also have a really scientific sense of observation.
For understanding and copying the nature for instance, he had to understand the process of creation. Then they talk about the « knowledge and know-how of the universal process of creation ».
At the beginning of the 20th century, in the Montparnasse district, artists were fascinated by scientific discoveries about light, colours, wave mechanics and industrial mechanics. They were immersed in a cosmogonic universe. Painters, sculptors, poets (Apollinaire) and architects met and exchanged ideas in this frontier period in which the knowledge of Antiquity was mixed with the achievements of the industrial period and sometimes with esotericism. Symbols were associated with technology and creation. Artists integrated the contributions of the 20th century with the ancestral symbolic knowledge of the Pyramids.
It is the search for this thread that has fascinated me since my childhood and I have never stopped acquiring knowledge in Egyptology, biology, geometry, history of religions and art in all continents. Indeed, global knowledge, and not only artistic knowledge, is necessary to find this thread that shows that Creation is a universal process that transcends peoples and times.
My encounter with the work of Constantin Brancusi was a revelation for me. Brancusi produced a global work whose whole is the bearer of messages, of a code that finds its sources in Antiquity, in all religions, in the continents and in modernism. I have found the thread in this global work that makes Brancusi an artist of Universality who crystallises Universal Creation in its purest form.
Today, most artists do works by mimicry without understanding the knowledge and know-how of the universal process of creation. This applies also to scientific people able to develop an acute knowledge in their specific area without understanding that it is just a true part of the knowledge and know-how of the universal process of creation which can also be found in architecture.
The key element linking all this knowledge is universality.
My discovery therefore makes obvious the common origin of all the cultures of Mankind.
This element concerns all the communities whatever their would-be cultural or religious origins. By its nature, this element is based on universality and equality suitable to all the Declarations in relationship with Human Rights.

Question : Can you develop the link between your discovery and sciences?

First of all, it is important to know that Brancusi did not create these sculptures instinctively. These works have a link between them and each one is part of a global message that finds its sources in ancient Egypt, in Greek and Roman temples, in the achievements of the Middle Ages, in the companionship. His work is part of a universal dimension, the understanding of which requires scientific geometric knowledge, Thales' theorem, Pythagoras, mathematics, the Fibonacci sequence, the Golden Number. Knowledge of ancient Egyptology, the history of religions, the symbolism of Freemasonry.
From this knowledge, and the discovery of Universality in the work of Brancusi, I have established a methodology that gives a key to the reading of the art and architecture of each country in the world and demonstrates the Universality of the process of Creation for all peoples.
Humanity, the different civilizations use universal symbols since the dawn of time, the egg, the foetus, the fish, the pentagon, numerology. The myth of Isis has never disappeared and has been expressed in various ways in religions and works of art.
The "universal knowledge and skill of the process of Creation" creates many bridges between different cultures. It brings together the great achievements of mankind and thus brings cultures together.
This universal artistic knowledge is a means of educating young people in a spirit of openness to others and of strengthening the links between all peoples.
The "universal knowledge and know-how of the process of creation" highlights a common origin for all cultures.

Question : How did you discover this methodology ?

It By deciphering Brancusi's sculptures in search of the "common denominator", I was able to establish a methodology that made it possible to find what unites his global and universal work.
The expertise of the sculpture "The Kiss of 1905" by Constantin Brancusi showed that this work resonated with the artist's global work.
Brancusi's work is universal. The methodology I have established provides a key to reading the DNA of the creation of humanity, of all its peoples.
During a conference at UNESCO, I presented the "Kiss of 1905" and gave keys to understanding the work of Brancusi.

Question : By the way, your discovery has been exposed in front of various individuals in diverse institutions. Can you tell us?

Actually, the Cercle d’Études Scientifiques Rayer has exposed « the knowledge and know-how of the universal process of creation » in front of Very Important Persons.
In 2016, our discovery, illustrated by the exceptional work of art « Le Baiser de 1905 » has been exposed during the historical and scientific Malraux symposium laid under the high patronage of the President of the French Republic and in partnership with the Amitiés Internationales André Malraux. Moreover I had lectured in front of a committee including scientists, market of art specialized barristers and Court experts.
We have also exposed our discovery « the knowledge and know-how of the universal process of creation » while a Press conference organized at the Press Club de France in 2017, by explaining Brancusi’s work, under the sponsorship of Anne Malraux, André Malraux’s grand-daughter, and of the Amitiés Internationales André-Malraux. Besides, its diffusion in live on the Press Club de France Facebook page has totted up about 65 000 sights.
In 2018, an event of official exposition of our discovery together with the work of art « Le Baiser de 1905 » has been organized at the Maison Lanvin head office by Shaw Lan Wang, owner of the Maison de haute couture Lanvin and Nicolas Druz, its General Manager. Following to this exposition, a book has been published by the Maison de Couture LANVIN. Its title is « From ignorance to knowledge » and shows a few of the scientific studies realized.
The same year, we have exposed the discoveries about « Le Baiser de 1905 » at the Morocco’s Royal Academy in Rabat under the high sponsorship of His Majesty Mohammed VI. We have realized the same expositions at UNESCO headquarters in Paris during the African Week in presence of the regretted Professor Béseat Kifié Sélassié, Advisor for three former UNESCO Director.
Following this, we have contributed to and realized numerous events at UNESCO. Quite so, the sculpture «Le Baiser de1905 » and the element it reveals relates with UNO’s and UNESCO’s self DNA because it represents a key for reading the culture as well as the identity of all the communities.
Moreover, we have organized in 2019 at UNESCO under the sponsorship of the Saudia Arabia Kingdom and of the Mali, in presence of His Excellency Monsieur Ibrahim Albalawi, Ambassador of the Saudia Arabia Kingdom permanent Delegate to UNESCO and of His Excellency Docteur Oumar Keita, President of the Africa Group at Unesco, several conferences about the element «the knowledge and know-how of the universal process of creation ».
At last, we have created the review Transmission which exposes the actions of the Circle. This review has been dispatched gratuitously to the UNESCO members delegations.

Question : Why this time do you expose to the Institut de France your discovery « the knowledge and know-how of the universal process of creation »?

Question : By which way will you expose your discovery?

The exposition of the discovery «the knowledge and know-how of the universal process of creation » will be made by the way of a conference. I shall instruct my exhibition with the support of works of arts coming from different parts of the planet and mainly those realized by the sculptor Constantin Brancusi.
In fact, Constantin Brancusi’s works of arts are in the heart of this universality of creation. They concern all the History of Mankind and to contribute to their spread allows to unit people behind the common values which are : happiness, peace and reconciliation of nations. They are unique and that is why those works of arts are so priceless.

Question : So, the event will happen in Paris with the participation of Koweït and the United Arab Emirates, why such a choice ?

For the past twenty years, the Koweït and the United Arab Emirates have chosen the culture and its transmission. To diffuse art or to evocate culture is not enough; the point is to understand! Those States have taken the means to carry on big cultural projects to the benefit of their own populations but also of the world one. Why do not give them the keys in order for them to discover the keys of our cultural world patrimony?