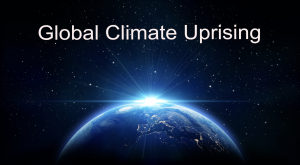 Global Climate Uprising Festival at COP26 in Glasgow to feature the power of media, art and technology to raise awareness of environmental challenges with viewpoints from young leaders from the most impacted areas of the world. 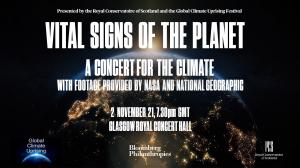 Vital Signs of the Planet Concert features young musicians from the Royal Conservatoire of Scotland to create a 90-minute live spectacular blend of sound and cinematic visuals, including footage from NASA and National Geographic. 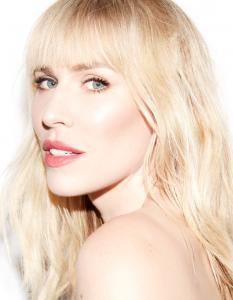 The Vital Signs of the Planet Concert, which is supported by Bloomberg Philanthropies, will include a performance by Grammy-nominated singer-songwriter Natasha Bedingfield, who will sing her worldwide hit “Unwritten,” an uplifting message about the future.

Events will include a performance by singer Natasha Bedingfield and the screening of a film narrated by actress Jennifer Lawrence.

This is a special moment for global youth and the arts to speak for the planet in Glasgow at this vital time for the world.”
— Bonnie Nelson Schwartz, Executive Producer

WASHINGTON, D.C., USA, October 29, 2021 /EINPresswire.com/ — The Global Climate Uprising Festival, produced by the LakeArts Foundation, will bring together organizations supporting the environment, education and culture to showcase their work in climate change research, advocacy and new solutions through media, art and technology to raise awareness of the global challenges facing today’s world at the United Nations Climate Change Conference (COP26) in Glasgow, starting on Nov. 2.

TongAbove, The Sustainable Glasgow Landing, Tuesday, Nov. 2.
TongAbove presents a film showcasing the design and plan to rescue island nations from rising seas due to climate change. Created by Jakob+MacFarlane and Uili Lousi, Tonga-based visionary artist and environmental activist, and OHAI, a Tongan organization for climate change awareness and official representative of the Tongan Government to COP24.

With the sea levels rising due to climate change, several Pacific Island states, including Lousi's homeland Tonga, are threatened with disappearing under the sea in the future. Without a way to relocate them elsewhere, they are developing a response to this extreme condition, using nature as a way forward. Partners: Jakob+MacFarlane, (France); OHAI, Government of Tonga, (Tonga), Supporting Partners: Global Climate Uprising (USA) and The City of Glasgow.

The concert will also include a performance by Grammy-nominated singer-songwriter Natasha Bedingfield, who will sing her worldwide hit “Unwritten,” an uplifting message about the future.

This is a special moment for global youth and the arts to speak for the planet in Glasgow at this vital time for the world. Several young, international environmental leaders from the most impacted areas of the world will address the concert audience: Agar Castro Tejada and Iniquilipi Chiari (Panama), Cedric Dzelu (Ghana), Natalie Sinclair (Scotland) and Elizabeth Wanjiru Wathuti (Kenya).

IMAX Film, A Beautiful Planet Cinema, Science Centre, Tuesday, Nov. 2, 18:30 (GMT).
The award-winning IMAX film, “A Beautiful Planet,” is a breath-taking portrait of Earth from space, providing a unique perspective and increased understanding of our planet and galaxy as never seen before. Produced in cooperation with NASA, the film features stunning footage of our magnificent blue planet — and the effects humanity has had on it over time — captured by the astronauts aboard the International Space Station. The film is narrated by award-winning actress Jennifer Lawrence and was produced by IMAX Entertainment and Toni Myers, the acclaimed Canadian filmmaker behind celebrated IMAX documentaries Blue Planet, Hubble 3D, and Space Station 3D.

Presented by the Global Climate Uprising Festival, the film contains warnings regarding climate change and environmental degradation using IMAX footage of Earth from space and time-lapse photography. It also offers positive reasons to take better care of our planet. IMAX veteran Jackson Myers, son of the film’s director, the late Toni Myers, will participate in a post-screening discussion with John Turner, who is Head of Documentaries for IMAX Corporation and oversees the development of all documentary films and non-fiction content for the IMAX global network. Partner: IMAX.

The Bamboo Ark, Panama Pavilion, Euroclime Pavilion, Tramway Station, Nov. 5 to 12.
The Bamboo Ark opens at the historic Tramway Station in Glasgow on Nov. 5. The Geoversity 2030 Bamboo Ark is a global and sustained campaign for biocultural leadership and living design for sustainability in harmony with nature. The debut of the Bamboo Ark taking place at COP26 in Glasgow is being led by Iniquilipi Chiari, co-founder and first president of the Guna Youth Congress, Micaela Ironshell Dominguez, co-founder and first secretary of the Indigenous Youth Council (North America) and other young Indigenous leaders as a worldwide call to action. Partners: The City of Glasgow, Global Climate Uprising City Kids Foundation.