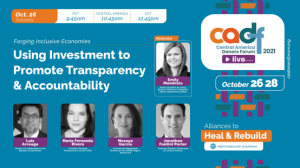 During the discussion, the panelists shared their insights for creating a more favorable investment climate in the region. Highlights from the discussion included Mastercard’s efforts in promoting working technology innovation, while the The Department of State and the National Entrepreneurs Council address priority policy issues, working hand-in-hand with governments, donors, and private sector representatives to improve transparency.
As Mr. Porter highlighted, “The key to this effort is an alliance of private sector actors, leveraging technology and digital tools, working alongside governments willing to push for greater transparency of the economy to better serve and protect the interest of citizens.”

The Partnership for Central America is a non-profit organization created in response to a Call to Action by Vice President Kamala Harris, in her role overseeing diplomacy towards the Northern Triangle and Mexico. The Partnership has thus far mobilized $750 million in private sector commitments to the region with the goals of coordinating practical solutions to advance economic opportunity, address urgent climate, education and health challenges, and promote long-term investments and workforce capability in support of a vision of hope for Central America.

Since the Partnership's launch in June 2021, there has been measurable progress toward the goals of driving opportunity in the region. In just two illustrations of progress, children from a rural indigenous community of more than 4,000 in Comayagua, Honduras are now able to access the internet, which connects these families to the global economy and creates immeasurable potential for their lives. Similarly, member organization Nespresso began sourcing their first coffee from Honduras in the company's history, which is a tangible outcome of a commitment to create high quality jobs and new economic opportunity in the Northern Triangle.