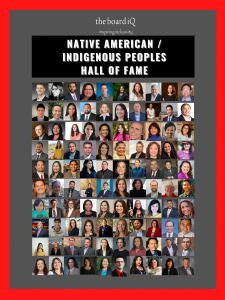 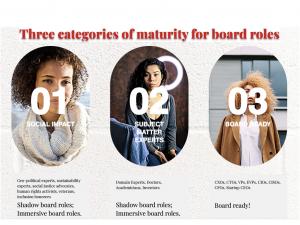 Shining the spotlight on board ready as well as the next generation Top 100 Native American | Indigenous Peoples in Corporate America.

The list has a whopping 61% representation of women including the first two Native American women to serve in Congress, US Rep Sharice Davids and US Secretary of the Interior, Deb Haaland.”
— Smitashree Menon, Founder and CEO, theboardiQ

The genesis of theboardiQ Hall of Fame began with the clear and humble intent to move the needle by raising awareness to increase representation of all slates of inclusion for board and executive roles in Corporate America.

This particular edition of the Hall of Fame is an effort to encourage and amplify Native Americans and Indigenous Peoples to pursue their ancestral knowledge, protect it with passion, and realize that their culture is powerful beyond their wildest dreams.

“As we did the research, it is remarkable to profile Native American / Indigenous Peoples Hall of Famers making such a huge impact, whether at the forefront of science, technology, generating patents, building apps, indigenizing gaming, doing core research on preservation of natural resources and the environment, engaging in grassroots activism, creating companies, the list is a revelation! They are Indigenizing all kinds of spaces! I think it’s incredible to see them carry their identities with them in whatever they engage in,” says Smitashree Menon, Founder and CEO, theboardiQ.

"The list has a whopping 61% representation of women including the first two Native American women to serve in Congress, US Representative Sharice Davids and US Secretary of the Interior Secretary Deb Haaland. We also have LGBTQ+ and veterans on the list."

“Reading about their inspiring stories of resilience, whether it was Secretary Deb Haaland, born in a military family (her father was a 30-year combat Marine who was awarded the Silver Star Medal for saving six lives in Vietnam, and her mother is a Navy veteran who served as a federal employee for 25 years at the Bureau of Indian Affairs) or Representative Sharice Davids, (who was raised by a single mother, who served in the Army for 20 years) brings tremendous hope and opportunities for the community. Sharice also became the first openly LGBT Native American elected to the U.S. Congress.”

The Hall of Fame spotlights board-ready and next-generation leaders, making an impact at the intersectionality of

“The Research Team at theboardiQ identified 100 stellar individuals that are at three stages of maturity for board roles”, says Smitashree. “CXOs, CTOs, VPs, EVPs, CIOs, CISOs, CFOs, startup CEOs who are seasoned and board ready. Then there are subject matter experts, exemplar in their own fields – domain experts, doctors, academicians, inventors who need to get some more exposure with shadow board roles and immersive experiences before assuming board responsibilities. And the third category are those individuals making a social impact – be it in the areas of sustainability, human rights, geo-political influence and government relations, influencing policy and legislation that impact our daily lives.”

Minority representation on Boards continues to be a problem – with racial and ethnic minorities making up 40% of the United States’ demographic population and yet accessing only 12.5% of Board Seats. Something that theboardiQ hopes to move the needle on, with its moonshot mission of creating inclusive boards for businesses.

"Around 6.6 million people in the United States, or 2% of the total population, identify as Native American or Alaska Native, either alone or in combination with another ethnic identity. Yet Native American women make only 60 cents for every dollar the average white man makes,” says Smitashree.