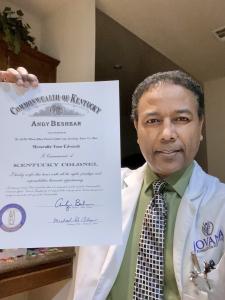 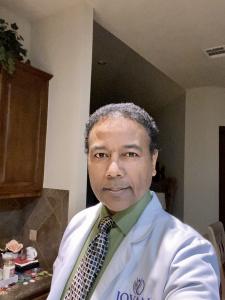 The commission of Kentucky Colonel is the highest title of honor bestowed by the Governor of Kentucky on an individual.

I am honored to have been nominated and commissioned a colonel. The Kentucky colonels are rooted in rich tradition, honor, and history, and to be a part of that heritage is truly inspiring”
— Dr. Ivan Edwards

The Kentucky Colonelcy is the highest, most prestigious and honorific civilian title of honor bestowed by the governor of the Commonwealth of Kentucky on an individual. The commission is a legal act emanating from the Office of the Governor and is a lifetime appointment.

By receiving this honorable commission, Dr. Edwards becomes part of the Honorable Order of Kentucky Colonels, a voluntary philanthropic organization, and a goodwill ambassador of the commonwealth of Kentucky.

Commissioned Kentucky colonels come from all walks of life. Some Kentucky colonels include US presidents, some Vatican popes, politicians, business magnates, actors, actresses, sports figures, first responders, military personnel, doctors and lawyers. The criteria for a commission requires that the individual has done some noteworthy accomplishments, attained notable personal achievements, and/or done outstanding service for the community, state, or nation.

Dr. Edwards has participated in various humanitarian initiatives, spanning over several years. He has also been a social activist for positive change. He co-started a child sponsorship program for disadvantaged children and orphans in Uganda in the early 1990s.

In 2013 through 2017, he established robust rehabilitation programs for people with pain and neuro-degenerative disorders in his capacity as director of two acute rehabilitation units, in San Antonio, Texas. From 2017 to the current time, he has integrated care for veterans in various hospital settings in Texas. From 2013 to 2018, he served as a Health and Wellness physician for the uniformed members of the San Antonio Fire Department.

He conducts community wide symposiums on the topic of resilience, and was part of a integrated task force that assisted COVID patients in Uganda.

Dr. Edwards is also a USAF reserve Flight Surgeon, serving his country at the rank of Lieutenant Colonel.

"I am so honored to have been nominated and commissioned a colonel, " said Dr. Edwards. "The Kentucky colonels are rooted in rich tradition, honor, and history–and to be a part of that heritage and promote a bright future for other people is truly inspiring."

About the honorific award
Historically, the Governor of Kentucky bestows the "Honorable" title upon someone with an honorary colonelcy commission through the issuance of letters patent. Kentucky colonels were considered important figures in the Commonwealth's history dating back to 1775, and were recognized as the state's iconic symbol of honor outside of Kentucky as early as 1875.

The honorary title is warranted through letters patent which grants the honoree the title of "Colonel" and recognizing the named honoree as "Honorable."