(PMOI / MEK Iran) and (NCRI): The regime is engulfed in many crises with no solution. The people’s daily life is worsening. The economic foundations have been destroyed. In 2021, inflation in Iran has reached 50 percent, and unemployment is on the rise. 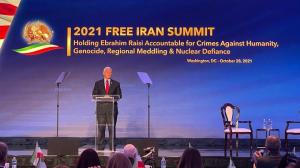 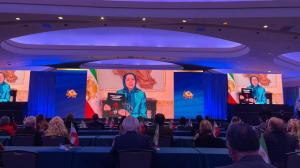 (PMOI / MEK Iran) and (NCRI): 48th US Vice President: I can say with certainty that the American people support your goal of establishing a secular, democratic, non-nuclear Iranian republic that derives its powers from the consent of the governed. 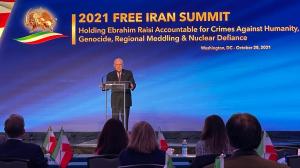 (PMOI / MEK Iran) and (NCRI): Hon. Michael Mukasey (81st Attorney General of the United States) spoke at Free Iran Summit: Raisi was a member of “death committee” and his job was to select who goes to death squad. 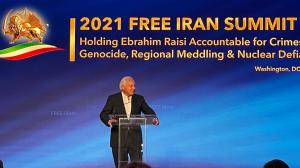 (PMOI / MEK Iran) and (NCRI): Hon. Robert G. Torricelli (Former Democratic Senator from New Jersey) at Free Iran Summit: Iran’s span of terrorism is not getting any better. Lets accept the reality. This regime must go by all means. 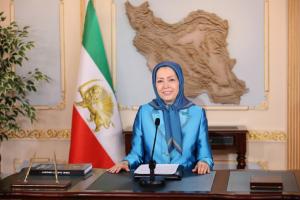 (PMOI / MEK Iran) and (NCRI): Allow me, first, to pay tribute to the 24 PMOI members who were murdered by the Iranian regime in the criminal missile attack on Camp Liberty six years ago. They were symbols of dignity and freedom who sacrificed their lives to free Iran. 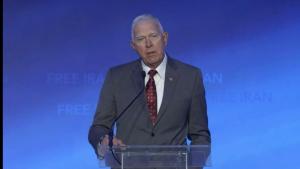 (PMOI / MEK Iran) and (NCRI): General James Conway (34th Commandant of the U.S. Marine Corps) at Free Iran Summit: People of Ashraf had the same level of determination as my marine when it came to winning. 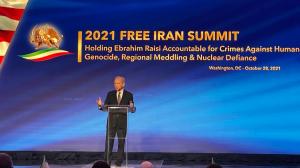 (PMOI / MEK Iran) and (NCRI): Senator Joe Lieberman at Free Iran Summit: Thank for coming from across America to Washington… yu are being clear that American people must stand with the people of Iran against the tyrants in Iran.

The MEK’s real base of support and popular base could be better seen in the widespread daily activities of the movements’ Resistance Unites across the country.

Today, the Iranian regime is under unprecedented domestic and international pressure. Its president Ebrahim Raisi has been condemned by UN authorities and international human rights organizations.”
— Ali Safavi

Immediately, the panic button was hit in Tehran, and the propaganda machine sprung into action, producing numerous inflammatory articles rehashing the usual state and unfounded run-of-the-mill allegations against the MEK. State-run media, including YJC news agency run by the IRGC, attacked VP Pence on 29 October for “supporting terrorist MEK” and “describing Maryam Rajavi as ‘inspirational for the world.’” Iranian Foreign Ministry Spokesman Saeed Khatibzadeh described the speakers as those who “no one takes them seriously” who “only tarnish their own image.” He referred to the MEK as a “spent grouplet” whose time is past.

At the same time, some bloggers in the U.S. attempted to exploit the event for partisan reasons, thus unwittingly aligning them with the regime’s talking points. One example was posted on POLITICO’s blog, which tied Pence to an “extremist” group.

In many ways, the NatSec Daily post reiterates the regime’s propaganda. These accusations have all been debunked by key American figures, U.S. courts, and Members of Congress.[1] Characterizing the MEK as “Marxist-Islamist” or a “terror cult” which “killed Americans in the 1970s” is merely the parroting of the oft-repeated propaganda disseminated by the regime’s intelligence services.[2]

The authors also point to a “poll” of people inside Iran to argue that the MEK is unpopular. In a closed society under the dark shadow of state repression, were opposing the state and aligning with a particular opposition group could get you executed for “waging war on God” as evident in the 1988 massacre of 30,000 political prisoners, respondents seldom feel safe to give honest answers for fear of retribution. That is why another poll recently found that 72% of the people praise Raisi, despite the fact that other evidence, including chants in mass protests, as well as the boycott of the June 2021 presidential elections by a vast majority of the Iranian people point to the people’s loathing of Raisi as a criminal who suppressed the 2019 uprising and was involved in crimes against humanity and genocide for his key role in the 1988 massacre.

The MEK’s real base of support and popular base could be better seen in the widespread daily activities of the movements’ Resistance Unites across the country and in the number of its activists having been executed or imprisoned.

The authors may be distressed to discover that their piece is eerily similar to a July 2021 story run by the Fars news agency, which is controlled by the terrorist Islamic Revolutionary Guard Corps (IRGC). Infuriated by the increasing international support for the MEK, the regime’s Foreign Ministry Spokesman lashed out at the prominent speakers’ insatiable thirst for dollars and anti-Iran obsession is driving shameful western hypocrisy.'”

That some Western reporters continue to repeat this claim is unjustifiable and inexplicable. The list of dignitaries that support the MEK is unique and exemplary. Delegations from 47 countries participated in a five-day gathering at the MEK’s headquarters in Albania and included former ministers, party leaders, parliamentarians, former prime ministers, cabinet ministers, governors, mayors, members of parliaments, senior military commanders, and officers, as well as human rights experts, and women’s rights activists.

To allege that these distinguished dignitaries have staked their entire political reputations, careers, and legal futures to defend an “extremist” and “terrorist” group is not only the height of ignorance but an insult to the integrity of these public servants.

It is now virtually universally accepted that the MEK’s terrorist listings in the U.S. and the EU were motivated by these governments’ attempts at sending a “goodwill gesture” to Tehran in order to initiate rapprochement and had no basis in fact and law. That is why the terror tag failed in multiple courts of law on both sides of the Atlantic.

The MEK was delisted not because of “an intense lobbying campaign” as the article contends, but after America’s second-highest court, the U.S. Federal Court of Appeals for the District of Columbia Circuit ruled that it will delist the MEK itself if the State Department fails to make a timely decision, leading to the lifting of the 15-year-old politically motivated designation by Secretary Hillary Clinton.

Today, the Iranian regime is under unprecedented domestic and international pressure. Its president Ebrahim Raisi has been condemned by UN authorities and international human rights organizations for his role in the massacre of 30,000 MEK political prisoners in Iran in 1988. Calls for his prosecution are growing. And the regime is desperate to score political points against the MEK in order to undermine its credibility and support.

Iranian politics is complex and understanding the MEK and its history admittedly takes dedicated time and effort. Nevertheless, history teaches us that when brutal regimes try to force dissent into extinction, commendable figures emerge around the world who listen to the voice of their conscience. They thus give voice to the voiceless, prevent totalitarian states from extinguishing dissenters, and support the opposition in their darkest hour. Today, while some are desperately trying to promote rapprochement with a fundamentalist dictatorship that is impossible to reason with, there are also others who are standing firm against the fundamentalist theocracy in Iran, writing history patiently and honorably by standing on the side of the Iranian people and their freedom fighters.

[1] Congress continuously rejected the MEK designation. Bi-partisan House majority letters and 32 senators described the MEK as a “legitimate resistance movement,” and a House resolution called for their delisting despite the State Department’s insistence on keeping them on the list. Among the co-sponsors of that resolution were seven committee chairs, including then-House Permanent Select Committee on Intelligence Chair, Mike Rogers.

[2] On July 5, 2010, the Toronto Sun quoted John Thompson, head of the security think-tank The Mackenzie Institute, as saying, “He was offered $80,000 by a man tied to Iran’s mission in Canada. ‘They wanted me to publish a piece on the Mujahedin-e Khalq,’ he said. ‘Iran is trying to get other countries to label it as a terrorist cult.'”