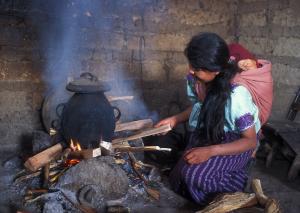 Roughly half of the world still uses dangerous indoor fires to cook their daily meals. The smoke from these fires kills four million people every year.

The most dangerous activity a woman in the developing world can undertake is cooking for her family, and most of them have a baby on the front or a baby on the back.”
— Nancy Hughes

PORTLAND, OREGON, UNITED STATES, November 15, 2021 /EINPresswire.com/ — When most of us think about nonprofit organizations, we may think of local food banks and nature conservation clubs, but there is another breed of nonprofit: Small international organizations that benefit families in developing countries. StoveTeam International is one such organization, working to improve the health of families in Central America, and fight deforestation and climate change, by providing something you might not think of: Cooking stoves.

Roughly half of the world still uses dangerous indoor fires to cook their daily meals. The smoke from these fires kills four million people every year, mostly women and children. And yet, despite this enormous scale, it is estimated that the issue of open-fire cooking is addressed at less than one percent of the scale needed to solve it by 2030.

12 years ago, Oregon grandmother Nancy Hughes lost her husband to cancer and volunteered in the kitchen of a medical team working in Guatemala. She saw babies with lungs choked from smoke inhalation, women with chronic lung disease, and children with debilitating burns. The cause? Cooking over indoor open fires. Hughes formed StoveTeam International, an organization that empowers Central American communities to manage their own stove-building projects, improving health, saving forests and strengthening their economies in the process. Hughes says,

“The most dangerous activity a woman in the developing world can undertake is cooking for her family, and most of them have a baby on the front or a baby on the back. For that baby, it’s equivalent to smoking three packs of cigarettes per day.”

Today, StoveTeam has formed partner projects across Central America, and changed the lives of over half a million people. The cookstoves they produce completely eliminate smoke inside the home, benefiting an average family of almost eight people, while using half as much wood, and saving 15 tons of CO2 from entering the atmosphere. All for a total cost of $100 per stove. Most stoves are paid for by individual donations, received by StoveTeam, including through their monthly membership program, which they call Emberships. The CO2 (carbon dioxide) savings each stove provides has even allowed StoveTeam to begin selling carbon credits, enabling people to become “carbon neutral” by offsetting the climate impacts of driving their car, heating their home, or flying in a plane, all through the direct donation of cookstoves.

This year, StoveTeam is focused on launching a new project in Guatemala. A team of local stove builders, trained by StoveTeam, are currently installing cookstoves in the large rural region of San Martín Jilotepeque, where many families are living on less than $1 per day. StoveTeam’s goal is to provide 5,000 cookstoves for San Martín in the next three years. Local stove builder Betty Hernández says,

“I am grateful because I get to show the world that I can change my life, improve my economy, and give the best for my son. With StoveTeam I have been able to get ahead, and I am proud to be part of a project that has improved so many lives.”

StoveTeam will be focused on this project in the years ahead, but eventually, like its other partner projects, it will turn management of the operation over to the local team. StoveTeam’s Operations Director, Forest Resener, says,

“StoveTeam’s primary role is the establishment of new stove-building projects that can eventually be managed completely by local people. That way we can move on and repeat the process in another region with a need for stoves. We believe it’s the only way to meet the world’s enormous need.”

To learn more or to help provide a stove, visit stoveteam.org

Photos and videos to accompany this story can be found at this link.